Tires get mileage on YMCA playground 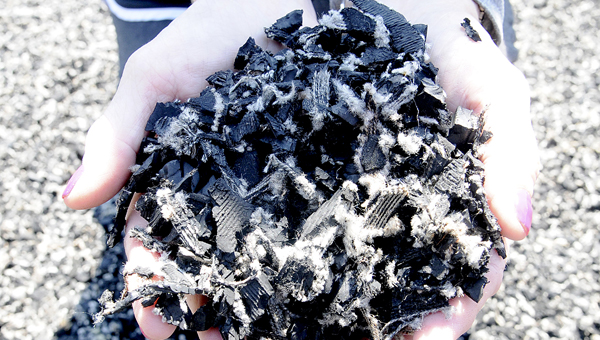 YMCA of Selma and Dallas County director Ann Murray holds some of the new rubber tire shreds used to surface the YMCA’s playground. The YMCA received a grant from Alabama Department of Environmental Management in order to get the new surfacing. (Scottie Brown | Times-Journal)

The YMCA of Selma and Dallas County recently received a grant from the Alabama Department of Environmental Management and now the facility’s playground is much better off.

YMCA director Ann Murray said the ground in the playground was “just dirt” and YMCA leadership went about finding ways to fund a major upgrade.

“The thing about it was we knew we just couldn’t write a check for that, so the great thing was being able to get the grant,” Murray said.

Thanks to the grant, the YMCA was able to purchase 35 tons of shredded tires that are now at the base of the playground, providing a flooring much more suitable — and safe — for youth.

Melissa Milligan, who works at the YMCA and helped write the grant, said volunteers from the Church of Latter Day Saints, Teen Challenge at the YMCA were joined by Tri-County Rentals to help spread the shredded tires recently.

“It was just phenomenal because we had to get the grant at that one price, so it was great that every body pitched in,” Milligan said.

The choice to use the rubber tire shreds over woodchips was not hard once Milligan and Murray weighed their options. While both work well for playgrounds, the tire shreds will not have to be replaced like their woodchip counterparts.

“You can do woodchips, but it has to be replaced and it packs down a lot easier,” Milligan said. “[Recycled tire] will pack down and it passes all legal standards even with the disabilities act.”

Milligan said the shreds had already been helpful with the day camps the YMCA is doing.

Nursing students get off to fast start