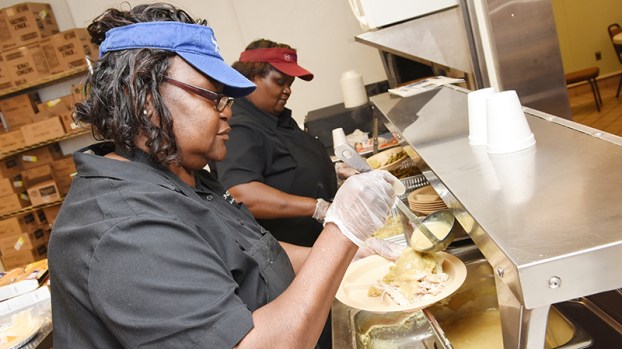 Angela Olds puts gravy on a plate of turkey as Marlena Albritton makes a plate of food in the background.

Janice Rand has worked at the center for nine years and was among the workers who spent countless hours preparing 45 turkeys, dozens of pans of stuffing and other holiday staples, but that wasn’t even the most stressful meal she was preparing this week.

Rand and her family were set to eat Thanksgiving dinner on Thursday evening, after Rand had finished feeding many in the community that had nowhere else to go for the holiday. Rand’s five kids and 12 grandchildren were among the family waiting for her at home.

“This is the first Thanksgiving without my mother. She just passed in March,” Rand said. “She used to make everybody wait until the rest of the family got there and make everybody bless the food and say what they’re thankful for. That’s what we are going to do tonight.”

Many were thankful for Rand and the rest of the staff of the Edmundite Missions on Thursday. Workers spent the entire week getting ready for the Thanksgiving lunch, which cook Marlena Albritton said is about double the meals of a normal lunch at the center.

“We do a little bit every day for about a week, so we’re good by Thanksgiving,” Rand said.

Angela Olds has been working at the Edmundite Missions for 20 years, so she’s used to preparing a big Thanksgiving meal. She said all the work is rewarded when someone comes up and says something nice about the food.

“It makes you feel wonderful when they come back and give you compliments,” Olds said.

The center made about 300 meals for home delivery Thursday and another 500-700 were served by the staff at the missions. Throughout Thursday’s lunch time, people were coming through the door.

“I love to cook and I love to see people enjoying my food,” Rand said.

Hundreds of people will be spending their Thanksgiving at the Edmundite Missions’ Bosco Nutrition Center with their adopted “family.” “The... read more