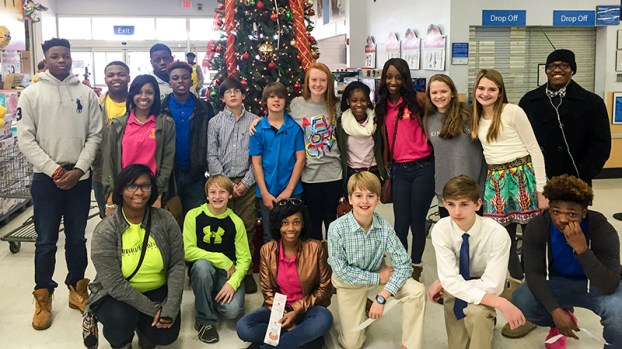 Two of Selma’s most historic churches have entered a companion relationship.

Earlier this month, 19 young people from Tabernacle Baptist Church and St. Paul’s Episcopal Church met at Walmart to shop for 12 other children as part of the Salvation Army’s Angel Tree Project.

The gathering marked the first official event of the new relationship between Tabernacle and St. Paul’s.

The relationship was sparked by the friendship between the Rev. Dion Culliver, senior pastor at Tabernacle, and the Rev. Jack Alvey, rector at St. Paul’s.

“This gives our churches an opportunity to convey a remarkably different narrative than the one we are used to hearing about, one that shows how following Jesus makes us one,” Alvey said.

The two young ministers have met weekly for lunch following a conversation at One Selma’s Mayoral Forum this summer.

Culliver said he is excited about the relationship between the two churches.

“I want both churches to be all in when it comes to the giving of time and resources,” Culliver said.

The pastors say they hope the two congregations not only discover the many ways in which the churches are similar but also embrace diversity as a way of glorying God’s creation.

“This relationship gives the church an opportunity to witness God’s heavenly kingdom on earth where people of all races and cultures gather around God’s throne to pray and serve together,” Alvey said.

The next opportunity for the congregations to come together will be at Tabernacle on Wednesday, Jan. 18, when Alvey will make a presentation on liturgical theology.

“This is s great opportunity to live out the gospel before the world and serve as a genuine model of reconciliation for our community,” Culliver said.