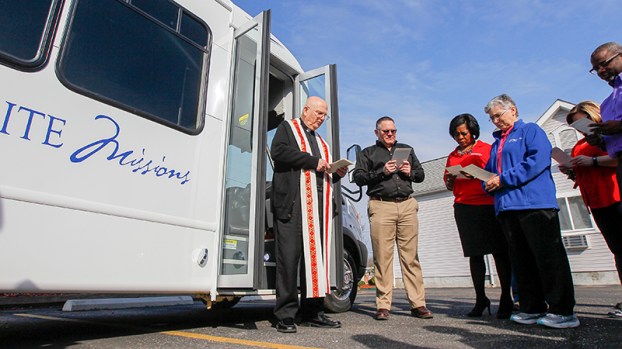 Edmundite Missions blessed a bus Tuesday morning that it will use for its programs, particularly those that work with children and senior citizens.

After a word of prayer and a few sprinkles of holy water, the Edmundite Missions’ brand-new bus was blessed and ready to hit the road Tuesday.

The bus was recently purchased by the mission to take care of transportation needs community children and senior citizens were having.

“We’ve been struggling with the issue of transportation for our kids and our seniors, and so through the generous donation of our donors, we’ve been able to purchase this brand-new bus,” said Chad McEachern, president and CEO of Edmundite Missions. “I can’t believe we have it. I’m just so excited about the opportunities it opens up for those that we serve, and that’s why we got it.”

McEachern said the bus, which seats 14 passengers, will allow the mission to help people who may not have been able to come to the Center of Hope in the past.

“We have so many kids that would love to come, and they have difficulty getting home at night without real public transportation, and so in the evenings we’ll be able to get them home safely, we’ll be able to pick them up at school,” he said. “The same goes with some of our seniors that may be homebound because they can’t drive or whatnot. They can now participate in our senior program, so it’s very exciting for us.”

McEachren said a special driver’s license isn’t needed to drive the bus, so it will be something many of the staff members will be able to use.

“Anyone can really drive it as long as they have a valid driver’s license,” he said. “I think it will just expand us, and it puts us right in the heart of the community where we want to be in helping those that most need our help.”

The mission used to use a van to pick people up, which required many trips back and forth to get everyone to and from, but now that won’t be much of an issue.

McEachern said the bus will be used to take people to the senior citizens program at the center each day as well as the after school program for children. It will also benefit the missions’ summer program.

“We have a summer program called New Possibilities where kids this past year went to Maxwell Air Force Base, the state capital [and] the Southern Poverty Law Center,” he said.

The mission got the bus last week, but McEachern said they wanted to have it blessed before they put it to use. The bus was blessed by Father Richard Myhalyk, who said a prayer and sprinkled holy water inside and out.

Soon after, McEachern and several staff members hopped on board and took a trip to Clark Elementary School to deliver school supplies and Valentine’s cards.

“I think it’s great that we’re going over to Clark to just be with the kids,” he said before the trip. “And that’s what this is all about, getting us even closer to the community we serve every day, and it’s a great start to start out at a school like Clark.”

McEachern said delivering school supplies was part of a new program the missions started after recognizing that students don’t just need supplies in the fall when the school year starts but also in the spring.

After finishing the first phase of its capital campaign, the Cahaba Foundation is ready to hit the ground running on... read more