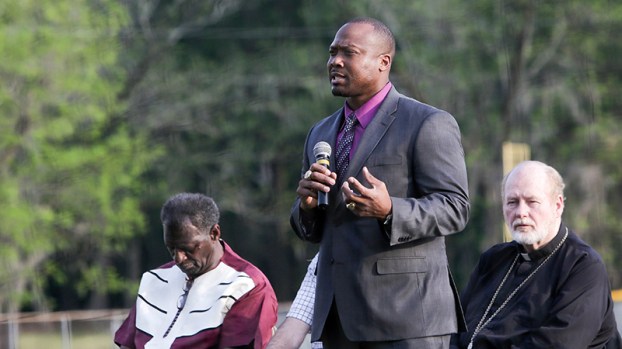 People from all over the community came together Thursday night at Bloch Park for the first ever Selma Night of Hope.

Around 200 people came out to hear Sherman Williams tell his story about fame, success, failure and rehabilitation through God.

“It’s a blessing for me to be here and share this message today and be a living testimony and to be here to talk about the miracles of Jesus Christ,” Williams said.

Williams was found guilty of marijuana charges and pled guilty to a counterfeiting charge in December 2000. He was sentenced to 15 years in prison and was released in 2014.

After spending a number of years in prison, Williams worked to bounce back and become a role model for those that might be dealing with some of the same troubles that he had.

His message Thursday was about choices, and overcoming the pressures of society to make the right decisions in life.

“I know the determination, dedication that it takes to be successful, to reach the highest of your potential,” Williams said. “But I also have been inside of a 7’ by 10’ prison cell. So I know from personal experience … that irresponsible decisions got me to the lowest of low.”

Since prison, Williams has held football camps around the state and published a book, “Crimson Cowboy: The Rise and Fall of a Three-Time Champion.”

Miah Jackson, city of Selma councilwoman and organizer of the event, said she was happy with the event and she hoped that people took to heart what Williams had to say.

“We’re just looking for brighter days here in Selma. We’re looking for wonderful things. We’re excited about the direction we’re going to, the new administration, the new chief of police,” Jackson said. “Everything that’s being said about Selma is changing. We’re looking to change the narrative and it starts tonight with the Night of Hope. We’re igniting that hope that’s within us and we’re stepping forward on a different path.”

James Steele Jr., general manager at Domino’s Pizza, was one of several local businesses that donated to the event.

“I wanted to give back because one, our kids are the future. And I can’t take from the community and not give back. I want the community to grow. I love Selma,” Steele said.

“I really believe it’s a step in the right direction.”

Selma Police Chief Spencer Collier has been in law enforcement for many years, but it was nights like Thursday that remind him why he does it.

In the late ‘90s, Collier was one of the arresting officers of Williams in Prichard, and he didn’t know that he was going to have the opportunity to hear him speak at the event.

“It’s amazing. He has a very powerful ministry,” Collier said.

“To see the way he’s turned his life around and him reaching out to others, it’s incredible.”

Jackson said she hopes this will become a yearly event and that it will grow in size and bring people together.

“Hopefully it can be a night that inspires others to do things in the community to bring about unity,” Jackson said. “If we work together, then we cannot be defeated.”