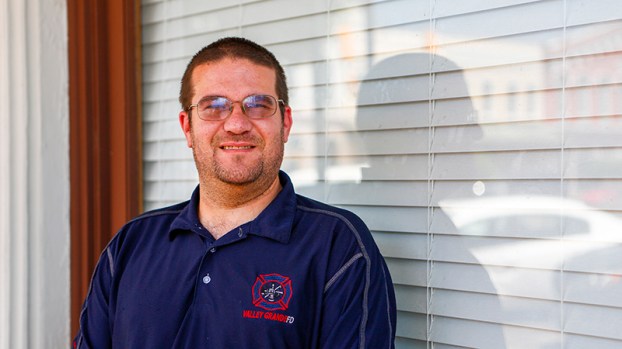 Chris Thompson has been a volunteer fire fighter for the Valley Grande Fire Department for 15 years.

First responder of week: Thomas has been with VGFD for 15 years

Chris Thompson has been a volunteer firefighter for the Valley Grande Fire Department for 15 years now.

Although he works full time in lawn care, he has spent much of his time at the fire department on calls and helping people in the community.

“In my younger days, I decided I wanted to start helping our community and I’ve just been in it ever since,” Thompson said. “As I was coming up, I always wanted to really help people. I just realized that I had a calling for it.”

Thompson said he has made lifelong friendships through volunteering at the station for so long.

“A couple of my friends [through the department] that I’ve been knowing for a long time, we always stick together,” Thompson said.

Thompson said the fire department is a brotherhood, and each guy has the others back.

“We always stick together,” he said. “If we go into a burning house, nobody goes in alone. We go in as two, we come out as two.”

Volunteering to be a fireman can be tiring, and can take a lot out of someone, especially after a bad house fire or car wreck, but Thompson said he continues going back year after year and call after call because people need first responders.

“Some people ask me, ‘why do you go into a burning house’ and I say courage is the answer,” Thompson said.

“I hate to see people get hurt.”

Thompson said the adrenaline also keeps him going back for more.

Thompson said he has no plans to quit volunteering any time soon, but that he plans to continue serving the community of Valley Grande for years to come through the fire department. “I’ve been doing it for so long,” Thompson said. “And I’m going to keep doing it until I can’t do it no more.”

The Selma Art Guild is ready to show off all the artists that competed in this year’s competition. The Selma... read more