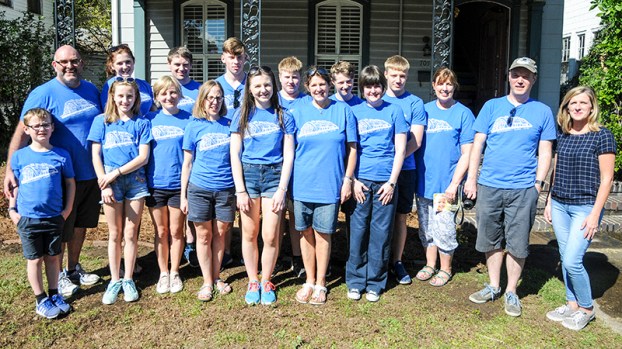 Early Tuesday morning, a group of volunteers from Bally Grainey Presbyterian Church in Northern Ireland lent a helping hand to The Bloom House on Dallas Avenue.

“We had a great group of volunteers,” The Bloom House founder Kristen Jones said. “This was really headed up by Cornerstone Presbyterian Church. They definitely understand the importance of reaching out to these children and families. They have really been a huge support.”

The group traveled more than 4,000 miles to visit their friends at Cornerstone Presbyterian Church who made the trip to Northern Ireland this past March.

On their visit to The Bloom House, the volunteers met Jones and learned about her vision and mission for her non-profit.

“We learned about the vision that brought this place about,” Graeme Kennedy, pastor of Bally Grainey Presbyterian Church said. “The vision to care for fostered children and their foster families. To provide quickly for their needs and to be a place where they can come and have space and time and just the ability to see that somebody cares for them, loves them and wants to help them.”

The group spent the morning landscaping the front yard and assisting Jones fold and organize clothes.

“We had a great time,” David Morrison, 29, said. “We came here early this morning, and we’re working at landscaping around the place…I think it was great, because we had heard the great work that was being done here and as a church we had been praying and thinking about caring for others less fortunate than ourselves.”

Morrison, who attends Queens University in Belfast, Northern Ireland and is in training to be a Presbyterian pastor, used his break in school to make the trip with his church.

“We have come to Selma because God loves people here, and we want to just let people know that,” he said.

In addition to helping out at The Bloom House, they have also gotten a chance to explore Selma and plan other activities as well.

They also plan on visiting the sites of the civil rights movement both in Selma and in Birmingham.

“Part of the plan is to help our young people understand what happened here during that time, and also for us to learn a little bit that we can take home to Northern Ireland,” Kennedy said.

The trip was 12-year-old Louise Brown’s first trip to the United States, and she was excited for her first trip.

“I didn’t know what to expect,” she said. “I was a wee bit scared, but I was really excited.”

Brown was shocked at how much progress The Bloom House has made in such a short time.

“It’s been like a year or so, and [Kristen] has done such a good job,” Brown said. “It’s going to be an unbelievable difference made whenever she’s completely finished. It’s amazing.”

The Bloom House is completely driven by donations and community help according to Jones. The additional help from a community across the Atlantic Ocean was especially gracious.

“This would not happen unless we all work together,” Jones said. “I’m just very thankful for people’s big hearts, and for the tangible expression of community and giving back.

“A lot of times we give and we don’t know where it’s going, but here people are able to see and can know a specific place that it’s helping.”