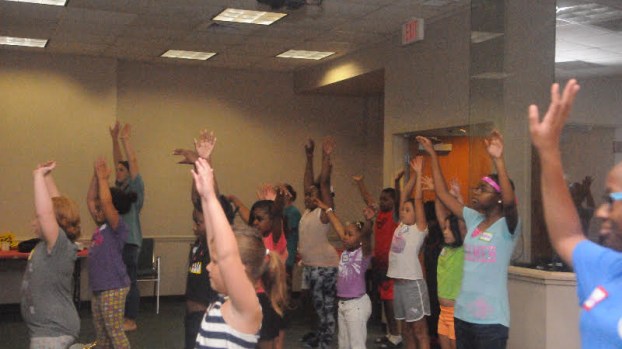 On Wednesday, children engaged in a dancing program taught by an experienced dancer at the Selma-Dallas County Public Library.

Dance instructor and library volunteer Colby Whitaker offered his time to teach the children how to dance and the joy of doing so.

As the program began, Whitaker stressed the importance of exercising.

“You have to make sure that your heart is pumping and all your muscles are warmed up, or you can pull something serious,” Whitaker said.

After completing the exercises, Whitaker aided the children in a variety of dances including jazz and hip-hop. He said he was impressed by how quickly the participants caught on to the dance moves.

“The kids caught on pretty well,” Whitaker said. “Well enough that they knew what they were doing. It was a lot of fun; I think they had a good time, too.”

According to Whitaker, he has been taking dance classes at the Dance Studio on Old Orrville Road for seven years and has enjoyed every minute of it.

“It’s been good. I’ve learned tap, jazz and lyrical from my dance studio, and then I self-choreograph in hip-hop and contemporary,” he said.

“My sister took dance two years before I did, and I watched her first two recitals and I immediately took interest,” Whitaker said. “When I saw her dancing, I was like, ‘I can do that, too.’”

He is now an instructor at the dance studio, and seeks to improve his own moves and performances while helping others improve theirs.

Becky Nichols, executive director of the Selma-Dallas County Public Library, congratulated Whitaker on his teachings. She said she admires his commitment to his passion, and is happy to see him share his knowledge and skills among the children.

“It’s a privilege to watch someone pursue their passion and share it with our kids. We’re very grateful for Colby,” she said.