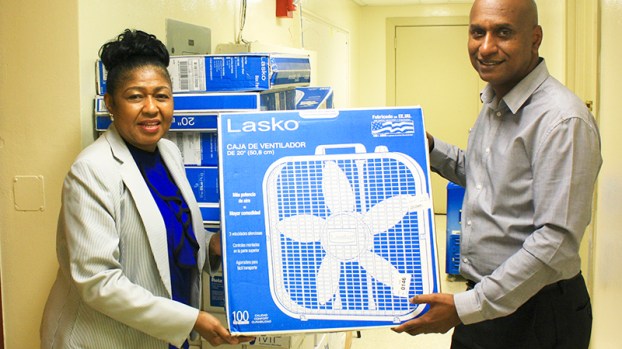 R.B. Hudson students and staff can now take a breath of fresh air after the Edmundite Missions donated 10 fans for the school’s immediate use.

After copper wire was stolen from the school’s HVAC units last month, there was a need for immediate relief from the summer heat.

Edmundite Missions CEO Chad McEachern said after hearing about the vandalism and how it was affecting the students, the missions knew they had to do something to help.

“The Missions always puts a special emphasis on children and education, which are the keys to escaping poverty,” McEachern said. “When we heard these kids were stuck in stifling classrooms due to the damage left behind by thieves, we knew we had to do what we could to help them focus on their futures, rather than air conditioning.”

Selma City Schools Superintendent Dr. Avis Williams said the school is grateful to the organization for their donation.

“We appreciate all that the Edmundite Missions does for our school district,” Williams said. “We have such a strong partnership with them and they do great things in the community as a whole.”

Dalling met with the school’s principal, Concetta Burton, and delivered the fans. Williams said the most special part of receiving the fans was that the organization took initiative in donating.

“I love that we didn’t ask for the fans, they just saw the need and they acted, and that means a lot,” Williams said. “They were intentional even without us requesting it.”

The fans are only for temporary relief.

“Our end goal is to make sure we have operating air conditioning units in all of our buildings,” she said.

Williams said the need is an even greater one for Sophia P. Kingston Elementary, which was also vandalized, because instructional areas have been affected.

She said the generosity of the organization does not go unnoticed.