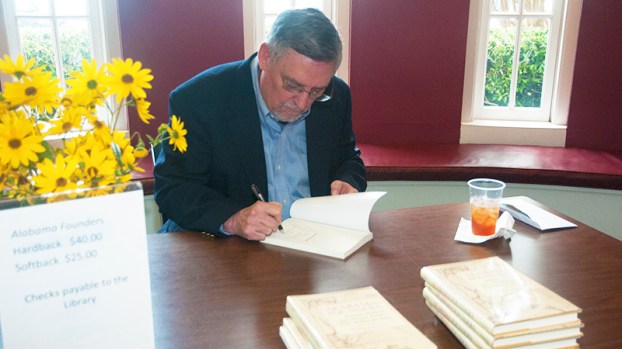 “The book is about the founders of Alabama, those who were key in getting Alabama territory established,” he said. “There are 14 different people that I’ve chosen to focus on.”

This season’s lunch series is centered on the Bicentennial celebration of Dallas County. Dallas County was founded in 1818. Lewis said he thought the book would be a good way to honor Dallas County’s upcoming birthday.

“I thought it would be something to prepare for the Bicentennial,” he said. “People can become aware of the type of people that formed this state.”

Becky Nichols, executive director of the Selma and Dallas County Public Library, said Lewis highlights some of the county’s most important founders.

“This selection by no means a complete list of the great men of our state,” Nichols said. “James has concentrated on those who opened our state for settlement, secured her statehood and laid the foundation for development.  The list includes William Rufus King, 13th Vice President of the United States, who is buried in the Old Live Oak Cemetery here in Selma.”

Lewis is retired from the US Department of Justice and currently serves on the board of directors of the Alabama Historical Association. He is also the author of “Clearing the Thickets: A History of Antebellum Alabama and Lost Capitals of Alabama.” Along with his other three titles, he has also published articles in the Alabama Review and Alabama Heritage.

The Selma City Council is looking into hiring an accountant on a contract basis. Accountants Robin Pearson and Naomi Allen... read more