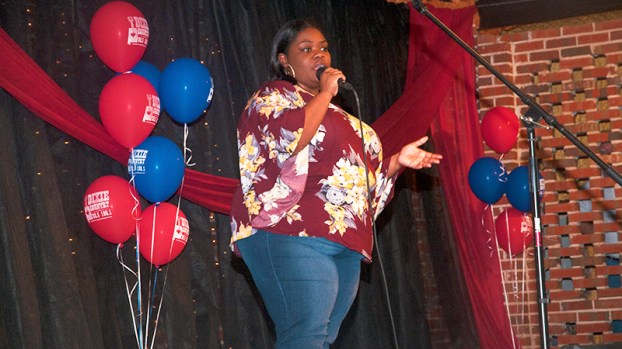 NATURAL WOMAN: Lynnethia Robinson was the victor Thursday night at the Central Alabama Fair Sing-Off. Robinson sang Aretha Franklin’s Natural Woman during the first round of the sing off.

Contestants were in tune at the Central Alabama Fair Sing-Off on Thursday night.

Dixie Country 98.5 and 100.1 partnered with the Selma Lions Club once again to put on their annual Sing-Off.

Caroyln Rowell, Sing-Off organizer, said contestants were asked to send singing samples in to be chosen for the competition.

“The top voice tracks that we received were chosen to sing at the fair,” she said. “They hit the stage and each sang one song, and were judged by a panel of three judges.”

She said there was only one requirement of the music to enter into the contest.

“Our only requirement was that [the music] was family friendly and no nonsense,” Rowell said.

The judges for the event were Jill Tutt of Demopolis, Andrew Swindle of Auburn and Gordon Welch of Selma.

Out of the 16 performers, there were only six chosen to move on to the second round after the 15-minute intermission.

They each came back on stage a second time and sang another song for the audience. After the second-round ended, Robinson, Grindle, and Edwards were chosen as the top three contestants.

Robinson sang Aretha Franklin’s “Natural Woman” during the first round and brought home the victory and $400 cash prize after her rendition of Whitney Houston’s “I Have Nothing” during the second round.