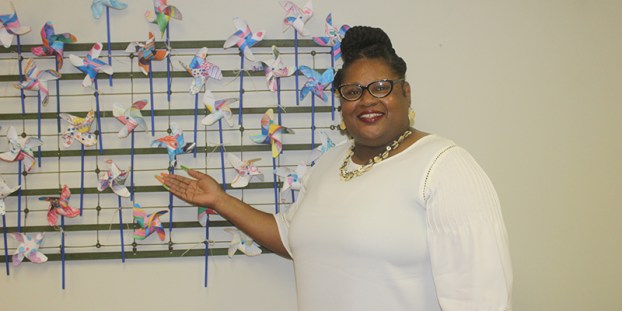 LaTanya Norris’ time as a forensic interviewer for the Child Advocacy Center (CAC) is coming to an end.

Norris said the path to CAC was started by a previous supervisor.

After training in Huntsville for a week, she came back to CAC and “hit the ground running” in 2011.

Norris said she heard many stories in her 352 total interviews she has performed.

“There were all types of stories,” she said. “Stories that you really don’t want to hear about but at the same time, you are glad that you are able to help these children and these people that have done these things can be prosecuted.

“For me the cases are getting harder and harder,” she said. “It is something I don’t see anyone being able to do for a long period of time. The stories you hear you can’t just do away with them, you think about them and wonder what happened to the kids and it is just a lot plus on top of me being a therapist I just decided it was time. The staff here is wonderful. I have enjoyed working with them.”

At the Cahaba Center for Mental Health, Norris works with youth ages 5-18 every day.

She is a Selma native and graduated from Selma High School in 1995.

“I love Selma,” she said. “I wouldn’t trade it for anything in the world. I know people have a lot of different thoughts about Selma but I love it. It is my home.”

Auburn University’s James I. Harrison School of Pharmacy held its Spring 2019 commencement ceremony on Tuesday, May 6 at Auburn... read more