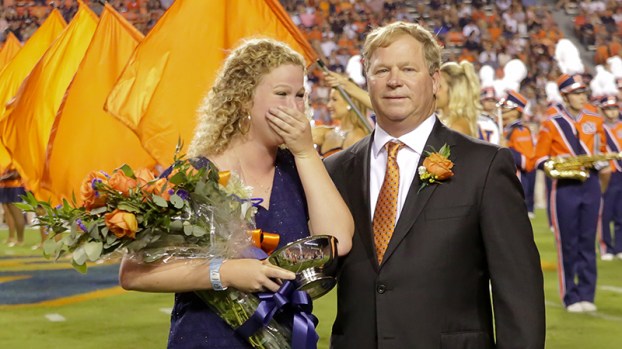 Ever since she was a little girl, Mary Stewart always dreamed of becoming Homecoming Queen at her beloved Auburn University.

To her shock and delight, Stewart’s wish came true last weekend when she heard her name announced in front of nearly 85,000 people attending Auburn’s homecoming game against Kent State.

“It feels surreal,” said Stewart, who graduated from Morgan Academy in 2016. “I’m honestly still in shock. I was completely content with just making it into the top five, but it is such an amazing feeling. I remember growing up coming to Auburn games and dreaming of being Miss Homecoming. It is strange to think that little girls may be looking at me and thinking the same thing.”

“We had a wonderful time and it was a great experience,” Jon Stewart said. “My whole family has always been Auburn fans. Walking across the field was an unbelievable experience.”

Stewart was chosen over Caroline Mathews (Athens), Maggie Hightower (Birmingham), Sophie Brint (Birmingham) and Alison Beverly (Pelham).  With her usual style and grace, Stewart was complimentary of the four finalists who stood on the field with her prior to the announcement.

“The other women nominated are all incredible and were running off of great platforms,” Stewart said. “I remember standing on the field and being fully convinced that my name wasn’t going to be called. It was such a shock, but I am extremely grateful.”

Stewart thanked her parents, Jon and Shannon Stewart, for their support during the campaign.

“My parents are extremely supportive in everything I do,” Stewart said. “I know I can go to them for anything. They have been so encouraging during campaign prep and into last week. They never fail to send me a sweet text and remind me that my worth isn’t found in material things or titles. I could not have done this without their unwavering love and support.”

Shannon Stewart, who graduated from Auburn University in 1990, said her daughter fell in love with Auburn at an early age.

“It’s unbelievable. Mary has embraced Auburn and Auburn has embraced her back,” Shannon Stewart said. “Mary enjoys life and people. She loves people. Mary’s humble and has been overwhelmed by all of the support.”

Stewart’s winning platform revolved around strengthening families, with the focus of making sure children are safe and healthy. She worked with Special Deliveries of Lee County, which is the child abuse prevention center for the Auburn area.

“I want students to know they can get involved,” Stewart said.  “I don’t think they did before, and now that they do, we will be able to work with Special Deliveries more.”

Auburn’s 55-16 victory over Kent State will be Stewart’s last homecoming as an undergraduate student.  She is scheduled to graduate with a Communications degree in May. She currently has a 3.2 GPA.

“Selma is always home, but Auburn is a close second,” Stewart said. “I have loved every minute at this university, and I’m sad to be leaving at the end of this year. The people in Auburn, much like Selma, have your back. They are always there to lift you up and truly want what’s best for you.

“It was a little intimidating going from a small school like Morgan Academy, to a big university like Auburn, but I have never regretted my decision to come here. It is an extremely special place to go to school, and I’m lucky to have called it a “home away from home” for the last three years.”