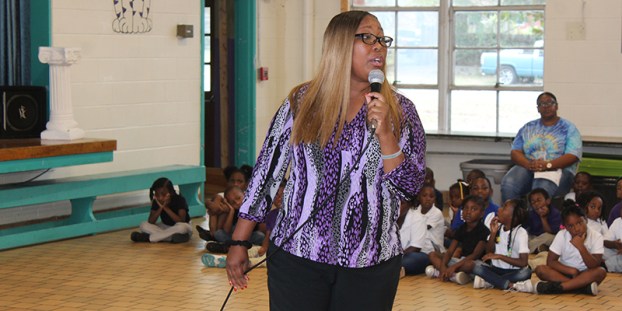 The Clark Elementary School played host to a Bullying Prevention Rally titled “We Are Our Brother’s Keeper” that featured speaker and activist Monique Davis.

Davis is the mother of Jamari Williams who took his own life in 2017 after being bullied.

Since Williams’ death, Davis made it her mission to address all types of bullying whether at school or online. Her efforts eventually led to the passing of HB366, also known as the Jamari Terrell Williams Act, named in honor of the 10-year-old in 2018.

The legislation, introduced by Rep. John Knight, D-Montgomery, expanded the current statute to prevent student against student harassment, intimidation, violence and threats of violence to students off campus as well. It also specifically includes cyberbullying in the definition of harassment.

Davis shared her son’s story to The Clark students.

“Jamari was my 10-year-old son,” she said as she held up a picture of her son. “He loved to dance. He loved soccer. He loved church. He loved being on the safety patrol. He was an honor roll student.

“He was an old soul,” she said. “He didn’t listen to music that we would now. He was a different child and that is why I stress that it is okay to be different. He was a crowd pleaser. When he got out on the stage and he began to dance he transformed into another person. He loved to portray Michael Jackson and James Brown. When I say that boy could dance I say he could dance. I don’t say that just because he was my son.

“He loved to smile,” Davis said. “He loved uplifting people instead of tearing people down. He was a hugger. He was a different type of child. He had other children, and some adults, that asked … why it was always about Jamari. Now, mind you, Jamari didn’t ask to be in lead roles he would have been just as fine being in the background roles but because he was such a perfectionist at everything he would always get those lead roles.”

Davis said the negative comments began to weigh down on Williams.

“My son would come home and ask me ‘mom, why is my skin darker than you or my brother?’” said Davis. “I always turned something negative into a positive and I always instill that in my children. Then I started to notice that Jamari would ask things like ‘why is my hairline different’ or ‘why is my head a different size than everyone else?’”

Davis said her talks now – especially with parents – stress the importance of what adults say in front of their children.

“When I come out and talk to parents and adults I try to stress the fact that adults need to be mindful of what they say in front of our children because they are not born with jealousy, hate or envy they are taught that,” she said. “When your child is listening to that they are starting to feel some type of way. Jamari had issues with bullying and I would tell him to pray for them. I didn’t believe in hitting back or anything like that.

“I knew some things had been going on and I had talked to some administrators,” she said. “I asked him if I needed to handle things he asked me not to. He didn’t like controversy at all. He loved peace. When we got home that evening I could tell something was different. He wasn’t the same. He became different. On this particular day, he was sad and distant. Even though I talked to my child that evening, I could still tell something was wrong. After a couple of hours, I will say after my child left this earth. I decided I couldn’t just sit down and ball up and not do something about this. I decided to get with some legislators.”

Davis said she remembers one field trip she took with Williams to the state house and Williams saying his goal was to have his name in the lights of the legislation board.

“He told me ‘Mom, when I become an adult, my name is going to be in lights’ not knowing that fifth-grade year it would be on the board but not for the reasons that we thought,” she said. “I got with some legislators and said we needed to do something with this harassment because I was that parent that thought I had covered all the angles. Every app that Jamari had was also sent to my phone. Every time he got on the Internet it would go to my phone but I missed two. That is where the cyberbullying came at. I did not realize the things that were said to my child as a mom and as an adult I was sad and mortified. I couldn’t believe that children would say these cruel things.

Davis ended her message by encouraging the students to speak out of situations they may experience at school or at home.

“If you feel you or someone you know is being bullied tell someone,” she said.