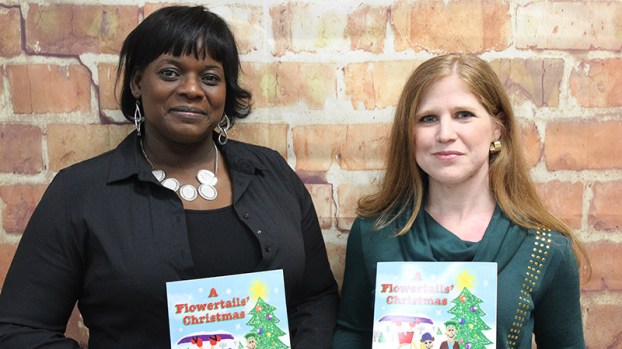 Selma native Shirley Hall has had her first book published.

“A Flowertails’ Christmas” is a children’s story about the Flowertails’ siblings, Rosebud, Moultrie, Plotty Lotty and Hedge, as they embark in Christmas shenanigans around the town of Cloverdale.

Hall works as a welder at Bush Hog, but found inspiration during quiet moments.

“Quietness is my comfort zone,” she said. “It just sort of comes to me.”

The defining characteristics of the Flowertails’ sibling is their tails, which change color based upon their emotions.

The inspiration for the characters in the story comes from Hall’s own children.

“They’re such characters,” said Hall. “They each have their own personalities, but they all try and hide their feelings. I wish they would just tell me how they feel.”

Hall says her character’s emotions are a little easier to read.

For instance, Hall says if one of the story’s siblings tail turns blue that means they’re sad, if they’re happy it will become yellow.

Through the story, Hall encourages children to stay true to themselves and not succumb to peer pressure.

Hall also said she wrote the book because she wants gets to get back to the basics of reading.

“They’re so caught up in their phones and social media,” she said. “And most of the time they aren’t elevating their minds in a positive way.”

Hall says she’s proud of her first published book, but she said she couldn’t do it without the book’s publisher, editor and illustrator, Michaela Barnes.

“It’s not my book it’s our book,” said Hall. “All I did was write it, [Barnes] did everything else.”

Barnes said she worked day and night for a couple of months to see the book completed.

Both Barnes and Hall were excited to see the book completed.

“A Flowertails’ Christmas” is available on amazon.com.

High fashion at the library

The stage in the Vaughan Room at the Selma – Dallas County Public Library was temporarily transformed into a runway... read more