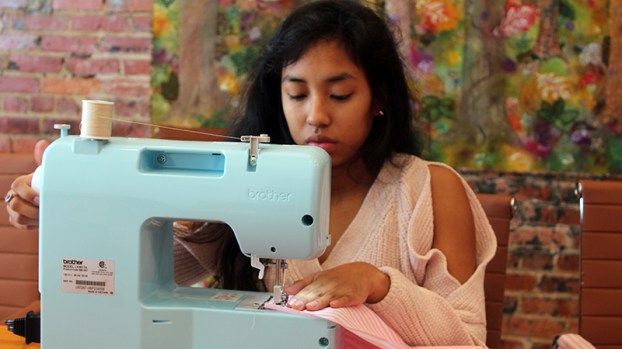 Quilting for the community at ArtsRevive

A group of quilters gathered at ArtsRevive for the first time his year on Tuesday to come together and create quilts for the community.
The diverse group consists of people of all ages, backgrounds and skill levels.
“Nothing else would’ve brought us together,” said ArtsRevive Executive Director Becky Youngblood.”
According to Youngblood, the group began in October 2018 and has grown significantly from the handful of members that they started out with over the last two years.
As ArtsRevive continues to grow and develop its new “Create Space,” Youngblood hopes to continue to bring younger people into the group so they can develop skills and potentially get jobs.
“It’s really just so much fun, though,” said Youngblood. “We’re supposed to meet from 9 to 11, but people are usually lingering until noon. No one wants to part.”
Not only does the group of quilters have fun, but they give back to the community as well.
The majority of the quilts that the groups has sewn have been donated to local nonprofits like The Bloom House and SABRA Sanctuary.
“These guys are coming together and quilting for the community,” said Rex Jones, President of ArtsRevive’s Board of Directors. “One of our main goals is to build up the community through art and this is just another way we can do that.”
Iva Schrock, who has been quilting for over 30 years, called quilting “the joy of her life.”
“It’s amazing to see what prettiness you can make out of scraps,” she said. “I love seeing a person’s face and the joy that it brings them when I give them a quilt.”
Zully Montero, an 18-year-old nursing student at Wallace Community College – Selma (WCCS), hasn’t been quilting nearly as long as Schrock, but she’s no less passionate.
Montero has always been interested in making quilts but never gave it a shot until five months ago.
“I never knew Selma had anything like this until someone told me about it,” she said.
Montero said she enjoys making things and her mother encourages her to fill her time with hobbies.
“My mom says ‘you need to go find stuff to do,’” she said.
Montero also said she finds providing groups like The Bloom House and SABRA Sanctuary with quilts rewarding.
“I almost cried when we donated them,” she said. “It was the first quilt I ever made.
The group of quilters meet at ArtsRevive every Tuesday at 9 a.m.
Youngblood said the program is funded by a grant from the Black Belt Community Foundation (BBCF), so the program is free to those interested.
“Everyone is welcome,” she said.

Selma native Shirley Hall has had her first book published. “A Flowertails’ Christmas” is a children’s story about the Flowertails’... read more