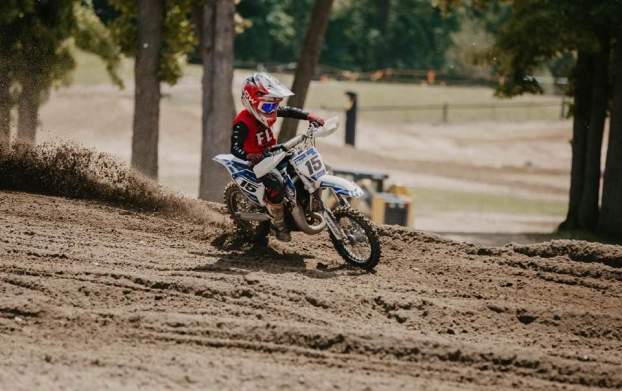 Collon Holbrook remains one of the top national performers in Motocross.

Holbrook, 9,  will be making his fourth straight appearance in the national event. Three years ago, Holbrook finished fourth overall in the 51 cc (4-6) Shaft Drive Limited class.

The Valley Grande resident will be moving up to a different bike and new division for the next several years. Holbrook will race in both the 65 7-9 limited class and 65 7-9, riding a 65 cc Husqvarna. He previously ran the last five years on a 50CC bike.

“I knew there were going to be challenges,” Holbrook said. “My favorite part of moving up to a 65CC bike was learning how to control the power with the clutch and not the throttle. I still have three years left on a 65. I am confident that I will get it dialed in.”

Holbrook said his goal is to finish 15th at the National Motocross Championship.

The entire Holbrook family goes on the road for Motocross events. Holbrook’s father, Chad, serves as his coach.  Holbrook’s three other siblings also travel with him to events: Ragen Belcher, 12; Callen Holbrook, 8, and Cohen Holbrook,  4.

Chad Holbrook said he admires his son’s dedication and hard work to becoming a stellar racer.

“With all the tough competitors and adversities he had to face, I watch in amazement,” Chad Holbrook said. “His never say quit and never give up attitude along with the way he has progressed this year has made me so proud of him.”

“Collon has a drive and determination at nine years old that sometimes leaves me speechless,” Amanda Holbrook said. “It never gets old watching him throw his bike around on the track or hit that next jump. His confidence on the bike keeps me at ease on the sidelines cheering him on to his next checker flag.’’

Holbrook is scheduled to compete in Thor Mini Olympics in November at Gainesville, Florida. His goal is to finish in the Top 10.