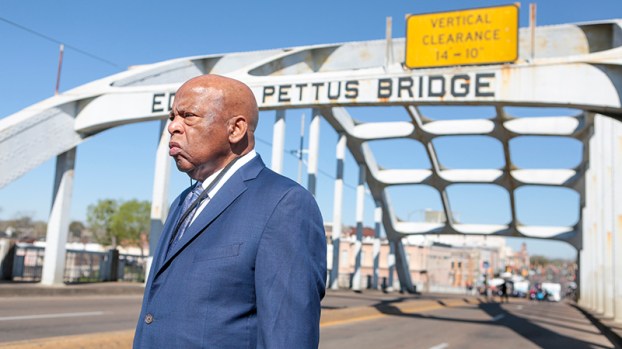 A full six days of ceremonies have been scheduled to honor civil rights icon U.S. Rep. John Lewis, who died last week, including a final trip across the Edmund Pettus Bridge Sunday, the site of Lewis’s 1965 beating at the hands of Alabama state troopers during his march for voting rights.

The “Celebration of Life Ceremonies” scheduled to honor “The Boy from Troy” will begin Saturday morning at Troy University’s Trojan Arena, where a service will be held celebrating Lewis’s life from 10 a.m. until 11 a.m., after which Lewis’s body will lie in repose until 2 p.m.

“John Lewis helped change the history of America,” said Troy University Chancellor Dr. Jack Hawkins Jr. “His focus on justice for all was a rallying cry for the ages. He was a good man with a loving heart and he will be missed.”

Lewis was born the son of sharecroppers just outside of Troy in February 1940, where he grew up on his family’s farm and attended segregated public schools in Pike County.

Later Saturday, Lewis will be honored with a service at Brown Chapel AME Church in Selma from 6 p.m. until 8 p.m., which will be closed to the public in lieu of COVID-19 precautions.

Immediately following the service at Brown Chapel, Lewis’s body will lie in repose there from 8 p.m. until 11 p.m. This visitation will be open to the public, but attendees will be required to wear face and mouth coverings.

On Sunday morning, a processional will carry Lewis from Brown Chapel over the Edmund Pettus Bridge on its way to the Alabama State Capitol, where Lewis will be received in an official ceremony at the capitol’s entrance at 2 p.m. before lying in state from 3 p.m. until 7 p.m.

“My heart is full knowing that John will be able to cross the Selma Bridge on his final march, one last time,” said U.S. Rep. Terri Sewell, D-AL, ibn a statement released Thursday night. “John’s final crossing, so different from his first, speaks to the legacy that he leaves behind. Only for John and only in the United States could this be possible.”

Like the visitation in Selma, attendees at the ceremony in Montgomery will be required to wear face and mouth coverings.

“As we prepare to law Congressman Lewis to rest, we are honored to welcome him home to Alabama to sit overlooking Dexter Avenue, as he lies in state in the Alabama State Capitol,” said Alabama Gov. Kay Ivey in a statement released Friday morning. “Let us remember the life and longstanding public service of Rep. Lewis. As a pioneer of the Civil Rights Movement, he is a proud son of Alabama. He dedicated his life to serving his community and advocating for others during some of the most difficult times in our nation’s history.”

Ivey has ordered flags to be flown at half-staff beginning sunrise on Saturday to sunrise on Monday, July 27.

For Sewell, the fact that Lewis will lie in state at the Alabama State Capitol is an “incredible tribute.”

“In this deeply sorrowful moment of loss, I find hope in our future with the news that Congressman John Lewis, Alabama’s native son, will be welcomed into Alabama’s capital in Montgomery to lie in state,” Sewell said. “What an incredible tribute to welcome John home. The irony that John should be granted this highest honor after being barred entry into the capital and the violence of Bloody Sunday speaks to his lifetime of dedicated service and activism. His refusal to bend to what is wrong, however entrenched, is a testament to his perseverance and servant heart. John worked within the system, dutifully and righteously, risking his life and his freedom countless times to ensure the rights and freedoms of all Americans. His life and his legacy deserve to be acknowledged in kind.”

On Wednesday, Lewis will be welcomed to the Georgia State Capitol for a ceremony at 2 p.m., after which Lewis will lie in state from 3 p.m. until 7 p.m. and again from 8 p.m. until 8 a.m. – the Phi Beta Sigma Fraternity will hold a service from 7 p.m. until 8 p.m.

On Thursday morning, a ceremony will be held at Ebenezer Baptist Church in Atlanta, before Lewis is interned at the Southview Cemetery.

Throughout the days-long celebration of life, Lewis’s body will be accompanied by a military honor guard.

The City of Selma Cemetery Department has put a halt on all weekend funeral services at city cemeteries, according to... read more