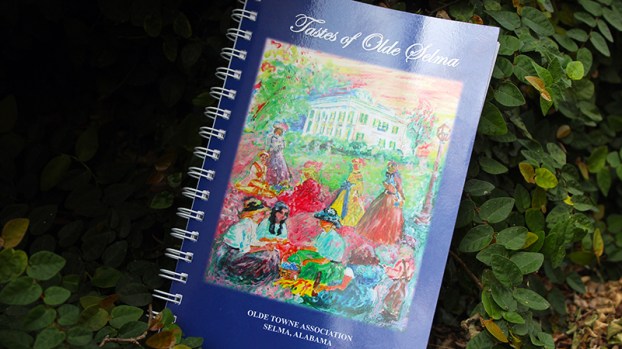 The sixth edition of the Olde Towne Association’s cookbook, “Tastes of Olde Selma” is now available.

The book has nearly 350 recipes from generations of Olde Towne residents as well as preserved popular features from previous editions of the cookbook including comments about local dining customs from the late Kathryn Tucker Windham and histories of local featured homes complete with pen-and-ink sketches by Bill Smith.

“Tremendous effort by many OTA members has gone into creation of this edition of the cook book, but I especially want to single out the foundational work done by Nancy Bennett and Candi Duncan for their help with the original recipes and Bill Smith for his wonderful pen-and-ink sketches of the homes whose histories are featured in the book.”

Tipmore also shared features new to the latest edition of the cookbook including a foreword tracing the history of Selma, specifically the architecture of Olde Towne, and a map of the historic district which pinpoints the homes that appear in the cookbook.

“The map will serve as a helpful guide for visitors to the area,” he said. “In addition to featuring some of the fine homes in the district, it contains the location of many of Selma’s historic public properties.”

As the impending holidays near closer and closer, Tipmore opined that “Tastes of Olde Selma” makes an ideal holiday gift for family and friends, reminding readers of the culinary, architectural and historical assets of the Queen City.

“Tastes of Olde Selma” can be purchased locally at Gallery 905 and other local retailers or by contacting the Old Town Association via P.O. Box 708, Selma, AL 36702.

In anticipation of fall, here is an excerpted recipe from the cookbook for Caramel Pecan Pie by Nancy C. Martin.

A former Selma High School honor student-athlete is off to a great start at Mississippi State. Bryant Gordon, who played... read more