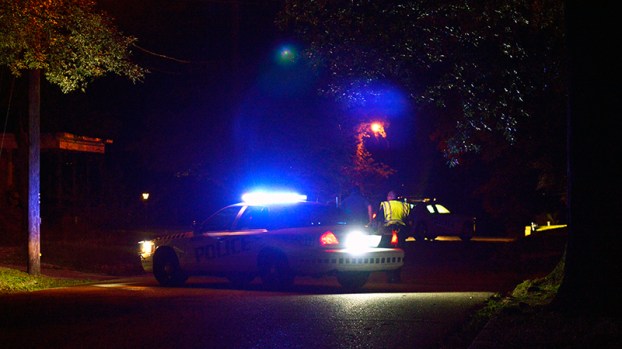 Police respond to the location of a shooting at King Street Monday night. The 19-year-old victim was transported by private vehicle to Vaughan Regional Medical Center and then was tranported to UAB.

The sounds of gunfire on the streets of Selma have become more common lately, as have the reports of wounded victims, and that fact became startlingly apparent over the weekend when reports emerged that the home of Selma Mayor James Perkins Jr. had been hit.

Selma Police Department (SPD) Chief Kenta Fulford said Tuesday that officers had removed a .40-caliber projectile from the mayor’s home, which had been sent off for analysis, and were busy checking video footage from various neighborhoods that might put them on the track of the shooter.

“We’re doing a thorough investigation on that,” Fulford said, noting that the department had not yet ruled out the possibility that Perkins had been targeted. “Just one bullet hole was found there, so it could go either way. We just want to make sure we cover our bases there.”

Fulford noted that the department has seen an uptick in “sporadic” and “random” shootings in the area, but said there was no clear indication as to why, though eh speculated that the rise in violence could be the result of a new group not yet on the department’s radar..

“It’s kind of hard to say what’s really going on because a lot of the people we’ve arrested are still in jail,” Fulford said. “It might be that there’s another group out there that we need to start looking at.”

The ongoing COVID-19 pandemic, which has surged across all 50 states over the last few weeks, may also be playing a role in the increased violence, Fuldord said.

“I do think it has and it is playing a part,” Fulford said. “Now, when we look at the news, we see cases are rising and states are turning red. What might be on people’s mind is if we are going to have another shutdown. They were already fatigued and now they’re looking at being locked down again. And some are still without jobs, so they are having problems on top of problems.”

But Fulford isn’t taking the increased gunfire lightly – since before the new batch of council members took office, Fulford has been working with Selma City Councilwoman Jannie Thomas on an effort to get cameras installed in every ward, particularly along main streets and intersections.

“If we can get eyes on every major thoroughfare…and a shooting occurs in one of those areas, they’re going to have to come down one of those main streets,” Fulford said, noting that he’s set to speak with Selma City Council President Billy Young about the issue in the coming days.

Despite the fact that staffing levels within the department are still below where he would like for them to be, Fulford said people can expect to see increased patrols in the coming days.

“We’re going to have extra people out patrolling,” Fulford said. “That’s going to kind of give us a show of force and maybe, when they see the officers out in the neighborhoods, pulling cars over, just doing the stuff patrol officers do…if every time somebody looks up they see police lights in the neighborhood, that will make them think twice before they do anything.”

According to Fulford, manpower numbers may see an increase in the coming days as well – a handful of officers are slated to take the department’s agility test later this week and, if they pass, they will head to the academy in January and then be on a two-year contact with the SPD.

“Hopefully, we can get them through the process and into the academy in January,” Fulford said. “That would put the patrol close to where it needs to be. That would put more officers on the street and in the neighborhoods.”

Fulford also said he’s working on developing incentives to attract new officers to the area, noting that city-owned houses could be used to provide rent-free housing for future officers.

Additionally, Fulford is still optimistic that his plans to bring more community policing programs to the city – specifically through the reemergence of the department’s bike patrol and mobile unit – can come to life.

However, the coronavirus crisis has thrown a wrench in plans to get officers into bike patrol classes and the mobile unit, which Fulford is currently talking with local dealers about outfitting with new tires, still needs pricey repairs before it can hit the road.

Fulford noted that the “Weed and Seed” program, which split $1 million between the SPD, the Dallas County Sheriff’s Office (DCSO) and the local District Attorney’s office, is still covering the cost of overtime pay for officers patrolling local “hotspots.”

As the department looks to get a handle on the rise in gun violence, Fulford noted that citizens also have an important role to play.

“The main thing – if they see something, say something,” Fulford said. “A lot of citizens just don’t want to call dispatch and report it.”

With that in mind, Fulford recently renewed the department’s partnership with CrimeStoppers, which allows citizens to anonymously report crimes in the city.

A $4M investment in local care