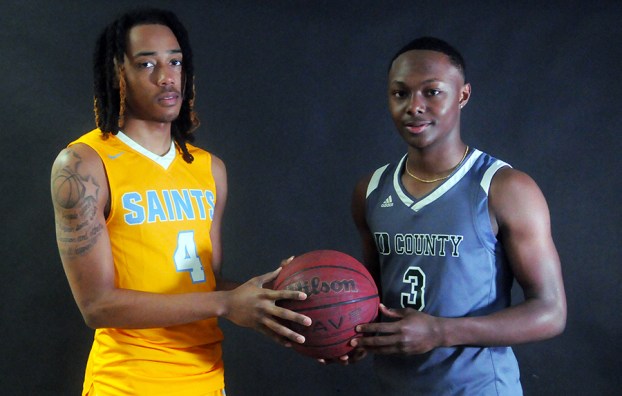 Longtime friends Jarvis Moss and Dee Ellis have shared many moments on the basketball court as both teammates and rivals.

Moss and Ellis can add The Selma Times-Journal basketball player of year award to that list of memories. The talented high-scoring guards are co-players of the year.

Both players and close friends do not mind sharing the award.

“It’s an honor to share the award with Dee, he’s family,” Moss said. “I’d rather for us both to get the honor together.”

“Being player of the year alongside Jarvis is an honor, all of our hard work paid off,” Ellis said.

Selma High coach Daron Rembert applauded both being co-players of the year.

Moss and Ellis both were capable of changing games either through clutch baskets or getting teammates involved.

The 6-foot-1 Moss averaged 20 points and four assists a game as a senior.

An example of Moss taking over games was displayed in the Area 7, Class 5A tournament. Moss  scored 17 third quarter points in a victory over Central-Tuscaloosa in the tournament semifinals. His layup as time expired lifted the Saints past Sipsey Valley to win the Area 7, 5A championship.

“Playing at Selma was fun and I’ll always remember us winning those area titles,” Moss said.

The 5-foot-11 Ellis averaged 18 points, nine assists and six rebounds. Ellis  impacted the game either through a key three-point shot or passing to an open teammate.

“We were always an underdog and it made us work that much harder,” Ellis said.

“I started as a head coach with Dee being a freshman and I watched him grow from boy to man in that time,” Nix said. “He’s a talented player who will be missed.”

Moss and Ellis both made the South squad in the AHSAA All-Star basketball game last summer, but  it was canceled because of the COVID-19 pandemic.

Their next stop could be Junior College basketball as each player will have opportunities at the next stage.