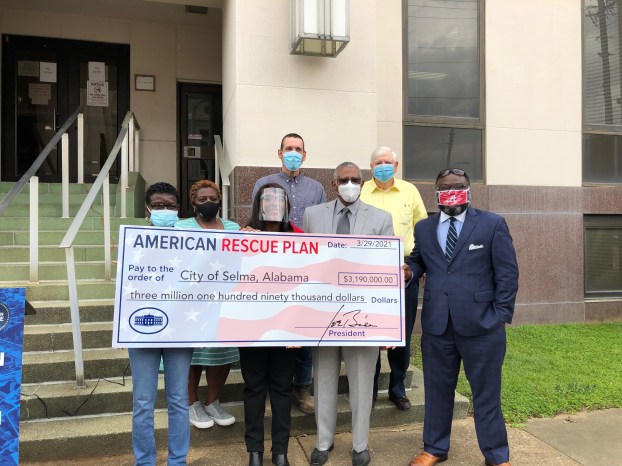 Sewell announced that Dallas County will receive $7.21 million and city of Selma to get $3.1 million from the Coronavirus State and Local Fiscal Recovery Fund with the goal to keep first responders, frontline health workers, teachers and other providers of vital services safely on the job as states and local governments roll out vaccines and fight to rebuild Main Street economies.

The total package is $1.9 trillion for the counties in Sewell’s 7th congressional district. Sewell said the funds must be used by Dec. 31, 2024.

“As the only member of the Alabama Congressional Delegation to vote in favor of this life-saving legislation, I was proud to join with Congressional Democrats to ensure equitable vaccination distribution, deliver direct relief to Alabamians and their families, put children safely back to school, and put people back in jobs,” Sewell said. “I want my constituents to know that Help is Here.”

Sewell announced that the cities of Valley Grande and Orrville will receive $42,000 and $32,000, respectively from the American Rescue Plan. Sewell said those two cities’ financial amount is based on their size.

Sewell also announced the plan will put children safely back in school. She announced that Selma City Schools will receive $21.7 million and Dallas County Schools to get $20.6 million.

The American Rescue Plan is also designed to put vaccines in arms, put money in people’s pockets, put people back in jobs.

Sewell also dropped by Bloch Park to speak with residents getting the vaccine and national guard members present. She spoke with Dallas County Emergency Management Agency Director Toya Stiles, who was on site.