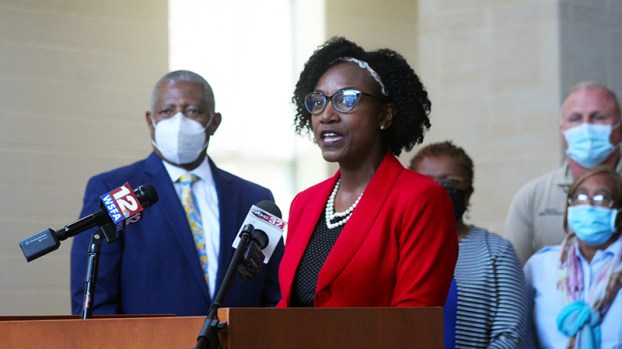 SCS rallies leaders to tackle ‘culture of crime’ in Selma

“Needless to say, this was a traumatic episode for our scholars, as well as our teachers and our parents,” Williams said of the incident, in which a fight in the cafeteria ended with a gunshot, though no injuries were reported. “As a result of that, we know that this is not only a problem for Selma High School, it’s a systemic problem, it’s a problem within our community that we want to address collectively.”

“We believe that it is extremely important, not only for our high school, but for this entire community, that we work together and that we bring our collective efforts together to ensure that our children feel safe, that our teachers feel safe,” Williams said. “On Thursday, after this incident occurred, I did spend time here at Selma High School and seeing the look of fear in our teachers’ faces was just not okay.”

Williams said she spoke with Perkins following the incident and began talking solutions.

“That’s what this group is all about, we’re prioritizing solutions,” Williams said. “And we’re looking for actionable ways to engage our community as a whole and also to [address] the safety and culture and climate in our community. Today was just the beginning, we started a conversation that will continue.”

Much of the plans laid out during the morning meeting included providing more opportunities for local youth and prioritizing mental health and wellbeing among Selma students and staff, with counseling already being offered.

“We asked some tough questions today,” Williams said. “We asked, from our perspective, ‘What is the culture of crime within the Selma community and what can we do about it?’ We asked the leaders within this community, ‘What are you willing to commit in order to attack this concern and this challenge?’”

“Our goal is to ensure that ever scholar within Selma City Schools and Dallas County Schools feels safe,” Williams said. “We have the same goal for our teachers and staff, that they feel safe when they come to work each and every day.”

Perkins then stepped to the podium to address the city’s expected role in tackling violence in the area.

“We claim together ownership of this problem, it is not a school system problem exclusively, this is not just a City of Selma problem, this is a national problem,” Perkins said. “We’ve seen this all over the nation. But what we’re doing here in Selma is we’re owning it, we’re claiming it, and that is the only way we will be able to resolve it and solve it.”

Perkins said there were two issues that had to be addressed – first, the “immediate crisis” within the school system, the incident and the presence of a gun in a local school, and second the “long-term, systemic issue of culture and crime” within the community.

“We own it, we claim it, and now we’re prepared to work to resolve it,” Perkins said. “None of us can get this done alone, we have to work on this together, we are committed to an integrated strategy, developing one that will actually work for all of us.”

An Atlanta organization visited Selma on Monday afternoon. Beyond the Bell, a youth organization based in Atlanta, crossed the Edmund... read more