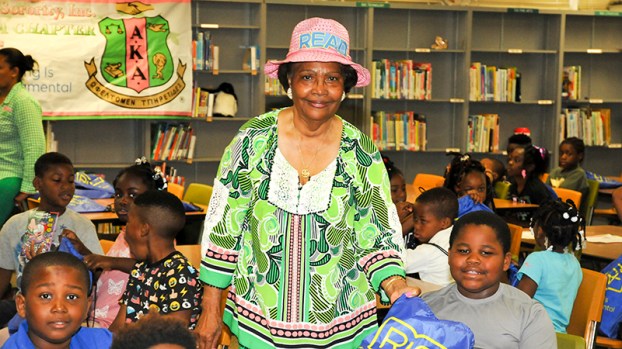 The city of Selma lost one of its beloved icons on Thursday.

Nancy Sewell, the mother of U.S. Rep. Terri Sewell, died at the age of 81. Sewell was surrounded by family when she passed away.

“Our family appreciates your continued thoughts and prayers during this difficult time,” Rep. Sewell said in a statement.

In honor of Sewell’s public service on the Selma City Council the City of Selma will fly its flag half-staff starting Friday until her final arrangements are completed.

“Mrs. Nancy Sewell, Librarian, Councilwoman and Community Activist, had tremendous influence and made an extraordinary impact on the City of Selma,” Selma Mayor James Perkins Jr. said. “To Congresswoman Sewell and the entire Sewell family I express sincere condolences on behalf of the city, and the Perkins Family.”

Sewell was more than just the mother of a Congresswoman. Sewell was a trailblazer in her own right, becoming the first African-American city councilwoman in Selma and a member of Alpha Kappa Alpha Sorority Inc.  Sewell was an educator for 36 years and served as Reading is Fundamental program with the Zeta Eta Omega Chapter/Women and Youth Service Center of Alpha Kappa Alpha Sorority Inc.

City and County officials reacted to the news of Sewell’s passing and shared their memories.

“She was a devoted wife, mother, grandmother, citizen and community advocate,” Selma City Council President Billy Young said. “Selma, Alabama and many of our residents are better off because of the work our beloved Mrs. Sewell. Her impact on our lives is longstanding and her work, which helped so many, will forever be remembered. Today, our hearts and thoughts are with Congresswoman Sewell, Mary, the twins and the entire Sewell/Gardner family. The best way to honor Mrs. Sewell is to wrap her family with love and to increase service to our community. Thank you, Mrs. Sewell for everything.”

“Sewell was multi-talented and has excelled in every avenue of her life, as indicated by the numerous honors and awards bestowed upon her by her peers and community,” Williams said. “She has never been content with the status quo. Each endeavor throughout her rich life has been met with new and innovative ideas, insurmountable energy, and the ability to motivate people.”

“Mrs. Sewell was truly a devoted mother and educator,” Evans said. “In her heart, she felt everyone deserved a chance to be successful. She never turned down helping anyone. Her unique way of helping others and contributing her time through service will never be matched.”

Added Bowie: “Mrs. Sewell was a trailblazer and change agent in the community. She will be missed. My prayers and condolences are extended to the Sewell family.”

“She was a legendary figure who will be remembered for years to come,” Jackson said. “Mrs. Sewell was a champion of school children. She will be missed.”

Nancy Gardner was born in Hope Hull. Sewell was married to Andrew A. Sewell, whom they met as students at Alabama State University. They had four children: Mary, Terri, Andrew and Anthony. Andrew Sewell, who coached Selma High to a Class 4A state title in 1977, died in 2016.

“We are proud of her accomplishments throughout her life, and we embrace the lifelong example of fortitude and service that she has left as a legacy,” Ross said. “The prayers of Hornet Nation are with her family.”