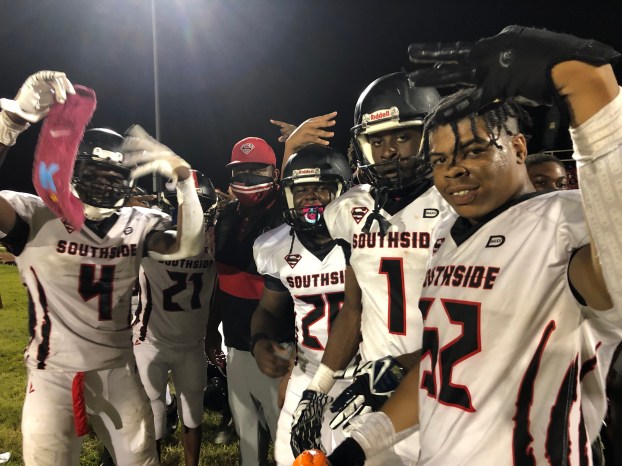 It was the Panthers’ second straight win in the series and the latest milestone in a turnaround that has seen Southside go from popular homecoming opponent to playoff qualifier in 2020.

Southside will try to start another run toward the postseason Friday when the Panthers travel to Greensboro for a Class 3A, Region 3 matchup.

Panthers coach Charles Moody was pleased what he saw from his squad last week.

“I liked a lot about what our team did,” he said. “They stuck together and played as a team. They stuck to the game plan. They carried out the game plan successfully. I’m very proud of what they put on the field.”

The coach said the win over a rival was good for Southside’s self-esteem.

“It’s a major confidence booster,” he said. “Our guys really believe in what we’re doing, but at the same time, we can’t get caught up in that one game or what the community is telling them. We’ve got to look forward to the next game.”

The challenge of moving ahead after a big rivalry win is not new in the world of high school football.

The task for Southside, however, has been made more difficult by Mother Nature. School was closed Monday and Tuesday due to the threat of impacts from Hurricane Ida, meaning no practice either day, and the Panthers were forced off the practice field after about a half hour Wednesday due to inclement weather.

Moody said it was a tough situation, and the team was just going to have to get in as much as it could Thursday in preparation for Greensboro.

“It is a huge concern, but it is definitely something I believe we can overcome,” he said.

“Over the two days we were out, we broke out our team and did a lot of Zoom meetings with our kids. I’m kind of worried about our conditioning, and trying to make sure all the kids have an understanding of the game plan is something that has us a little worried.”

Greensboro (0-2) is seeking its first win of 2021 after back-to-back losses to Bibb County and American Christian, but Moody said the Raiders have the pieces to be formidable.

“First and foremost, they’re very athletic, probably one of the most athletic teams we’ll see all year,” he said. “They’re fast at every position. The quarterback is very explosive … It is a team we know is a very capable team

“They’re a downhill running game team. They probably run the ball 90 percent of the time. They’re quarterback is able to make a play when things break down. They’re real physical along the line of scrimmage.”

Moody said stopping the run will be the No. 1 objective for his team Friday.

“Secondly, our kids, if they have a grasp of the game plan and know the game plan despite the lack of practice, that’s going to be big for us,” he said. “Also, if we can have discipline and not have penalties, I think we’ll be fine.”

By Lew Gilliland The Selma Times-Journal Just about everything that could go right seemed as if it did for Morgan... read more