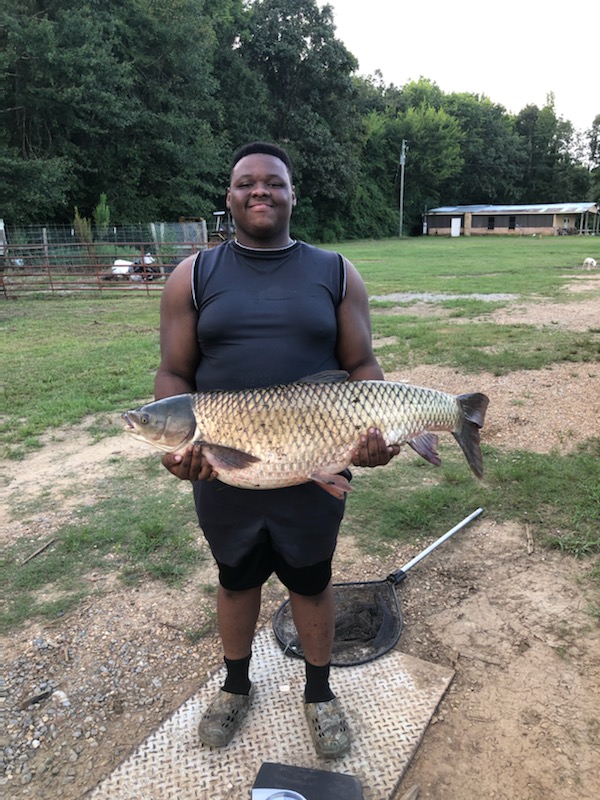 Williams, a sophomore, was fishing alongside his uncle, Johnnie Earl Harris Sr., who owns H&H Ranch.

Williams said it was the biggest fish he ever caught.

“I was so excited when I realized how big it was,” Williams said. “In my years of fishing, I never caught a fish that big. I will never forget my biggest so far.”

Williams credits the catch to his family.

“I owe a big thanks to my grandma, Gladys Grayson and Uncle John Earl,” Williams said.

William’s father, Earle Williams Sr., said his son has been fishing at the age of two.

“My son’s a real good fisherman and caught his first fish at the age of two,” Williams Sr. said.

Over the years, Williams’ fishing has improved.

“He’s a real good fisherman now,” Williams Sr. said. “His fishing reel is what the professional fishermen use.:

Fishing is a big part of Williams’ life away from attending high school.

“All he does is fish,fish,fish,” Grayson said. “He eats, drinks and sleep fishing.

Grayson added that Williams has a few techniques to improve his skills.

“He watches a lot of Youtube videos on how to become a better fisherman,” Grayson said.

Grayson said fishing will be a big part of her grandson’s future.

“He hasn’t set career goals, all he wants to do is be a fisherman,” Grayson said. “It’s all about fishing with him and he’s been doing for a long time.”

Williams Sr. said the next step is getting his son to compete in a future BASS Fishing Tournament. His mother is Shakenyia Pullom.

“We’re trying to get him a boat to compete in the BASS Tournament,” Williams said.

Williams can’t explain why fishing is a big part of his life.

“I just love fishing,” he said.

Williams is looking forward to the next big catch in Selma. Nothing will compare to one he made last month on his uncle’s ranch last month.

A teenage murder suspect escaped from the Perry County Jail for the second time in a week. According to Fourth... read more