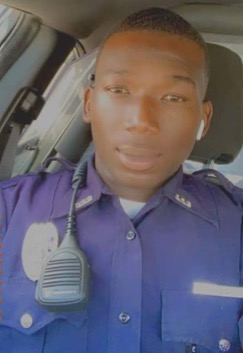 Two days after America stopped to remember the victims and honor the heroes of 9/11 on the 20th anniversary of the terrorist attacks, the Selma Rotary Club took some time to celebrate our local heroes, and remember one who was recently lost.

The club held a free hot dog lunch for local first responders and front-line workers at Cornerstone Presbyterian Church in Selma on Monday. The event was held in honor of the late police officer Marquis Moorer, who was shot and killed July 27 while going home for an early-morning lunch break.

Moorer’s family, including his mother and children, were present, and the club declared Monday as Officer Moorer Day.

“I was most excited to see Marquis Moorer’s family. I even got to play with (1 ½-year-old) Marquis Moorer Jr.,” club Co-President Jerria Martin said.

Martin spoke of the fact first responders put themselves in the line of danger every day.

“They make that sacrifice,” she said. “This was the smallest token of appreciation, but it was something we plan to do annually.”

Said Armelia Oliver, chairperson of the club’s service committee and a club board member, “Our motto is service above self. In holding this event, we’re saying thank you to first-responders and front-line workers. It was a great demonstration of our motto of giving service back above ourselves.”

Oliver added the last 18 months have been tough for many the club honored Monday.

She spoke of the hurt many felt due to Moorer’s death.

“It was very devastating … because Officer Moorer lived in my ward,” she said. “I knew him personally.”

Said State Trooper Lt. Donald Shepard, “As a law enforcement family, we all feel the pain and want to support Officer Marquis’ family.”

Shepard was part of a contingent of state troopers who attended Monday. He praised the luncheon.

The Selma City Council is expected to vote on a camera solution at Tuesday night’s City Council meeting. The council... read more