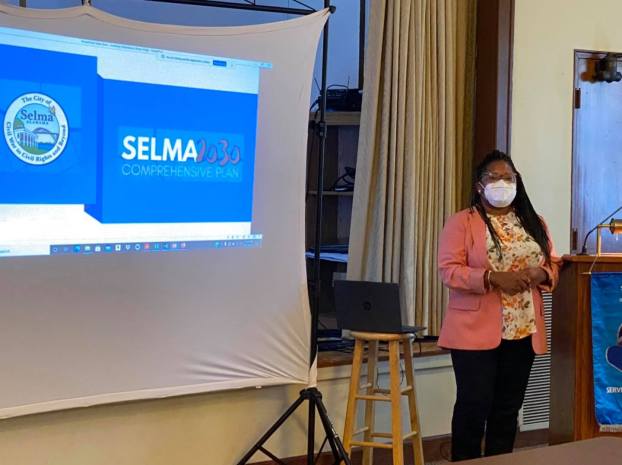 The city of Selma continues to collect public input as part of its development of a comprehensive 2030 plan.

Rachel Metcalf, the city’s preservation development coordinator, also participated and described what a comprehensive plan is. She described the plan as “an official document adopted by a local government that establishes long-range policies on how the community’s future growth should occur.”

Wooten said the city began its plan development in August by placing a community questionnaire in local newspapers and social media.

Next, city officials began attending community meetings to give residents a chance to fill out the questionnaire and provide input. The next step will be the formation of advisory committees, which will study and make recommendations in areas covered by the questionnaire, including economic development; housing and neighborhoods; downtown revitalization; parks and recreation and community; education; and health and safety.

The city is currently seeking individuals to serve on the advisory committees. Anyone interested can contact Brandy Wilkerson at brandy.wilkerson@atrc.net.

“We want everybody to come in and roll their sleeves up so that we can really get some implementable strategies in place as we plan how to move Selma forward and how to move Selma into the year 2030,” Wooten said.

A second round of community meetings will be held so that city officials can share recommendations with the public. The advisory committees will then go back and finalize their recommendations, which will be brought together in the form of a comprehensive plan and presented to the City Council for possible adoption.

Club members were given a chance to provide feedback in several areas, including economic development, or more specifically, which kind of jobs they would like to see brought to Selma.

Answers included health care, public safety and industrial jobs. Club members asked about workforce development and whether the city was working with the Chamber of Commerce and Dallas County. Wooten said workforce development will be addressed by one of the advisory committees, that the city had reached out to some county officials for input and that the city is reviewing recent reports issued by the Chamber and the Selma/Dallas County Economic Development Authority.

Club members also sounded off on a topic under housing and neighborhoods: What type of housing do we need more of in Selma?

Wooten said some feedback has indicated the city doesn’t have enough housing stock for professionals.

The lack of housing in Ward 8 was also discussed.

Wooten said city officials know they need to take action to show residents the plan is more than just ideas on paper.

“I definitely think the community wants to see some action at this point, that’s why this comprehensive plan is not like a plan that we’re going to do and put on a shelf,” she said. “We want it to be real things that are attainable on a five- or 10-year timeline.

“If we can try to work on the low-hanging fruit, try to do the things we know we can do now, that will give people hope. If a block in your neighborhood gets transformed, it might inspire you to take better care of your property.”

Wooten said the survey that kicked off this process takes about 10 minutes to fill out, and the city is still accepting them. A QR code that takes you to the survey is available on the city’s Facebook page.

“We encourage you to take the survey,” Wooten said. “Let us get your feedback so that we really can come back and take it back to our advisory committees so we can put some strategies in place.”

By Lew Gilliland The Selma Times-Journal Selma’s economy could get a nice boost if plans to reopen a local plant... read more