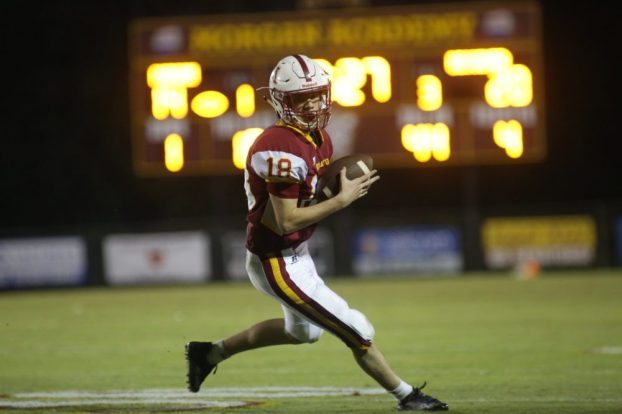 Morgan Academy came up clutch when it was needed the most en route to a 21-20 victory over visiting Bessemer Academy on Friday night. It was Morgan’s first win over Bessemer since 2009.

“They’re such great kids,” Morgan Academy coach Danny Raines said of his squad. “They work hard. They made plays down the stretch against a really good, really impressive football team. This is a huge win, and I’m so glad for these guys to experience it.”

After the Rebels scored on their first two possessions of the second half to take a 20-14 lead, and after coming up empty the first three times they had the ball after halftime, the Senators put together an eight-play, 69-yard drive for the winning score with 8:32 to play.

The Senators (4-3, 2-1 AAA, Region 2) made several clutch plays on the drive, including a 7-yard pass from Andrew Thomas to Cink Minter on fourth-and-3 from the Morgan 38-yard line.

Andrew Morris recovered a teammate’s fumble for another first down later in the drive, and Thomas connected with Allen Lightfoot for a 37-yard gain to the Bessemer 7.

Thomas capped the drive with a nifty play on fourth-and-goal from the 2. On a keeper, he faked to the middle, then went around end and dove to the pylon for the TD. Wade Mason kicked his third extra point of the game in as many tries to make it 21-20.

Two 5-yard penalties backed Bessemer (1-5, 1-2) up, and Minter made an interception two plays later. Thomas converted a fourth-and-1, getting the yardage on second effort, to seal it in the final seconds.

Bessemer took a 20-14 lead when QB Matt Masingill threw 32 yards to Trace Hendon for a TD, and Samad Muhammad scored on a 41-yard run the next time the Rebels had the ball. The try for two failed after the first score, but the Senators converted after the second.

The Rebels led 14-6 at halftime despite losing four fumbles in the first half. D.J. Harris gave Bessemer a 6-0 lead when he returned one of those miscues 50 yards for a TD

Morgan picked up first-half scores on a 5-yard run by John Allen Ingram and an 8-yard pass from Thomas to T.B. Clements.

Southside stayed in the Region championship with a 42-12 rout over Monroe County on Friday night. Ernie Campbell and KeAndre... read more