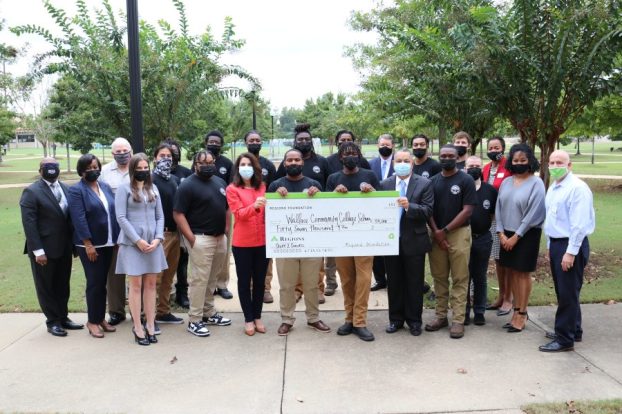 Regions Banks awarded a grant for a newly-created program to Wallace Community College-Selma this week.

The Regions Foundation announced a $57,000 grant to WCCS for the new Shift2Success Manufacturing and Ready to Work Training Program.

The  students thanked WCCS and Regions Bank for funding the grant.

The Regions Foundation’s grant supported the inaugural class of students who began coursework.

The eight-week program gives students the opportunity to earn up to five specialized training certifications. “Our work at the Regions Foundation is about building more inclusive prosperity and removing barriers to success,” Regions Foundation Executive Director Marta Self said. “That’s exactly what Wallace Community College in Selma is doing every day, and that’s why we are honored to support this incredible new program.

“One of the most meaningful ways we can make a difference is by connecting people with resources designed to help them begin successful careers. Alabama has many important manufacturing industries with jobs readily available, and Shift2Success is helping students across West Alabama prepare for those jobs. We believe this program will benefit current and future students for many years to come.”

Shift2Success Assistant Director Robert Lee choked back tears as he spoke about the first class. “The program started off as an idea, but you need preparation to put in the work and you need one important ingredient: commitment,” Lee said.

Instructors Anne Williams and Rob Nicholson each presented awards to the class, praising their dedication .

Dallas County Probate Judge Jimmy Nunn applauded Regions Banks for providing a building block to WCCS. “The seeds you planted will be harvested at a later date,” Nunn said. “The seeds won’t be harvested tomorrow. It takes a while to harvest fruit.”

A second Shift2Success class is expected to launch later this month.

Selma City Schools and Dallas County Schools teamed up to officially start the statewide parenting month on Thursday at the... read more